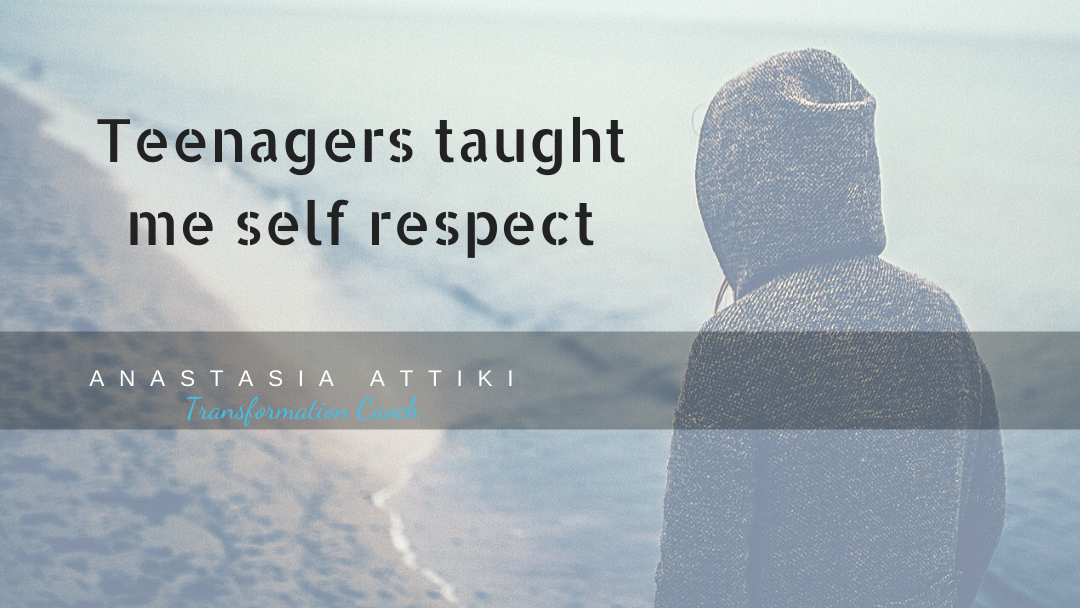 Years ago, I used to be a further education teacher and I remember entering the classroom for the first time to be struck by the big attitude change of teenagers from the time I was their age. I witnessed a completely new world where young people no longer did what they were told by their teachers without objection. They often misbehaved if they didn’t feel listened to.

I grew up in a small town in Greece and was brought up to respect my elders and by respect I mean obey and often fear. This wasn’t a two-way arrangement. Parents of that generation were of the “why should I respect you, you’re my child?” mentality.

Today’s teens don’t automatically do what they’re told and often have no fear of consequences and that’s sometimes a good thing. Behaving the way you’re supposed to because you’re terrified of the punishment is not about respect, it’s about survival. But how do we as parents or educators who have had no precedent of this new way of relating gain respect? How do we get our adolescent children and students to behave respectfully?

The answer is simple. Give respect to gain respect. We have to give respect to teach them how to give it back. We have to give it, so they don’t demand it by having adolescent tantrums when we are least able to deal with them. We have to listen to them and allow them to be who they are and treat them as if they were equals even when they’re not behaving accordingly. When we back off and stop demanding that they do as we say they realise that they are responsible for themselves but often they find accountability a big burden and ask for our help anyway. That happens when we’re not forcing them to. We have to work past our panic and anxiety of what will happen if we step back and allow them to be.

Initially, I found it difficult to treat them as equals when their behaviour was so far removed from mine but I soon realised that sometimes adults don’t behave like adults either. I asked myself, if I was teaching an adult class and some student were being immature how would I talk to them? How would I treat them in the classroom?  What would I say? Would I not treat them with respect especially if they were older than me? I had been conditioned to respect my elders although they sometimes behaved like toddlers. So, if I took age out of the equation, I could do the same with my adolescent students.

That’s exactly what I did. I imagined that they were not misbehaving teens, but that they were eccentric millionaires who paid vast sums to be taught by me and I had to treat them with the utmost respect. As I did that, I started to notice the language and tone I used changed. I was gentler and was making suggestions rather than orders. I was still in charge of the class but I was more polite and respectful. And as my please and thank yous became commonplace I saw something quite beautiful emerge. These previously poorly behaved individuals started to mirror my behaviour. They became more courteous and considerate. I noticed students tempered their language when they addressed me. I referred to quite a rough and unruly group of male students as gentlemen and guess what? They started behaving like noblemen. They asked politely to be excused, they were agreeable when previously they kept arguing just for the sake of it. They even stayed behind to talk to me about their problems, dreams and aspirations. That later inspired me to become a coach but that’s another story.

Once I learned to listen and respect my teen cohort, I started to do the inner work and I realised that when I was growing up I had not been shown how to respect myself. I wasn’t encouraged to express myself if my opinion bucked the trend.  I had come from generations of individuals who did not know how to value and respect themselves therefore they had to elicit it from others by instilling fear or guilt. I was set on not repeating that cycle as I found it draining so thanks to my adolescent “teachers” I had stumbled upon a way of finding self-respect.

When I later had a child of my own, she gave me the same message, loud and clear! If you want respect you have to give it. So, I showed her respect and compassion and our relationship has benefited tenfold. She has taught me that children come to show us better ways of relating to others. The more difficult they are the more they make us look inward and question our thoughts and beliefs.

Young people have taught me that just like they need me to treat them with respect and understanding, I need some of that too and although I didn’t get that earlier in life because society didn’t deem it a necessity for children, it doesn’t mean that I can’t give it to myself now. I am eternally grateful.